I've been obsessed with the idea of having a navy blue velvet couch in my formal living room. I've pinned some pretty fabulous blue velvet sofas and other furniture to my Wish List board on Pinterest. Not sure my husband is as in love with the style as I am, and it will be a long time before I can afford one (and by then I may have moved on to another trend, knowing me). So, to satisfy my craving for a glamorous navy velvet Carrie Bradshaw-esque couch, of course it is time to turn to miniature!

A while back I won this couch from a Call of the Small giveaway. I used it in one scene that I thought was pretty cute, but the color and pattern isn't very appealing to me. It has pretty clean lines and a simple design though, so the time has come for a makeover. Have I ever reupholstered miniature furniture before? No, this will be a first :) I wanted to remove the bottom part of the sofa and replace it with some wooden or chrome legs. This step was easier said than done. I used a kitchen knife to wedge, slice, crack, and pry the bugger off. Finally, it was done, with a mess of tiny nails sticking out. They snapped off easily enough with a wire cutter. 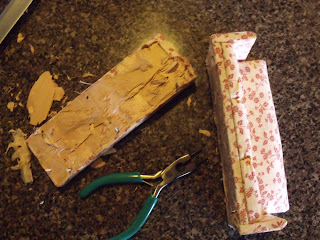 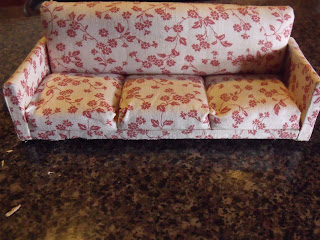 Next I starting playing with fabric. I looked for navy velvet fabric at a craft store, but before buying it I thought about looking instead at used clothing from a thrift store. I found a long-sleeved buttoned down blue velvet women's shirt. It was more than enough fabric, plus it cost a lot less. After deconstructing the shirt, I cut off a piece and started contemplating how to cover my sofa. I used straight pins to hold it in place. Now I am kind of stuck. I don't know what to do next. Should I use glue or staples to attach the fabric directly? Sew some kind of slip cover? Sew or pin the fabric directly? Or just figure out some temporary way to keep it on. 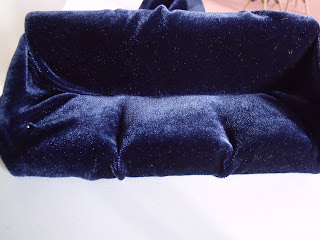 I am also considering using pins or thread with tiny beads to create a tufted detail on the back of the sofa, but I am not sure it would look right with the overall style. Anyway, that's a little too much information/over thinking for this project. Any advice would be great, and I'll let you see how it turns out. 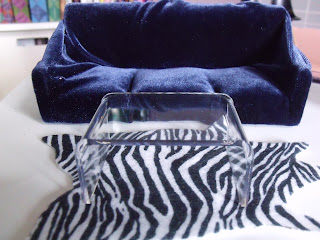 Once I finish it, I have some lots of 1:1 scale inspiration photos I can attempt to recreate in 1:12 scale. Oh, and apparently nothing goes better with a navy velvet couch than a zebra skin rug and acrylic coffee table :) 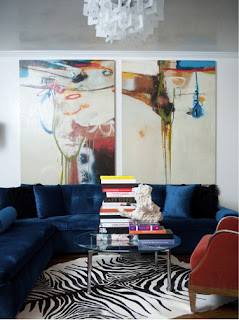